We provide a comprehensive range of services tailored to our clients requirements. Project work can be undertaken on a single well or regional basis incorporating wireline and/or LWD datasets with integration of ancillary well data (core, petrography, NMR, PLT and geomechanical data). We aim to proactively engage with our clients in order to provide an efficient, timely interpretation customised to each individual project. 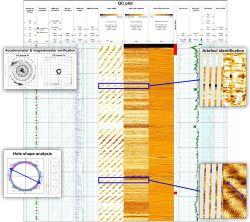 Analysis can be undertaken on all commercially available borehole image tool types (wireline and LWD) from both water-based and oil-based mud environments.

A rigorous data QC process is undertaken in order to identify and, if necessary, correct potential issues with the supplied datasets.

Processing can be carried out using either Recall or Terrasciences software. Results from the QC review are plotted, sections of poor data quality are highlighted and results are discussed with the client prior to interpretation. 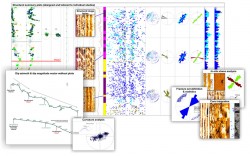 Structural interpretation of borehole images may include: 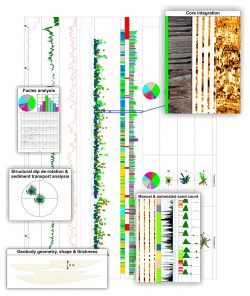 Sedimentological interpretation of borehole images may include:

Our staff are available 24-7 for near real-time and quick-look interpretations on all of the services that we offer. In addition, near real-time evaluation of LWD borehole image data can be performed to determine bedding dip and fracture/fault occurrence, which can aid in near real-time geosteering or sidetrack positioning decisions. 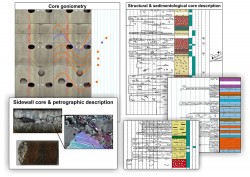 A diverse set of information can be derived from slabbed, full and half-cut core.

Core goniometry can be undertaken on both oriented and unoriented core using one of two methods: the traditional acetate sleeve method and the 360° core photograph method. Both methods permit orientation of core and geological features visible in the core to provide a high resolution manual dip dataset that can be integrated with core logging, borehole image and petrographic interpretations.

Acetate sleeve core goniometry is carried out manually in the core store by wrapping acetate sheets around the core and by tracing geological features. Resulting acetate sheets are scanned, spliced and loaded into TerraStation software where they are referenced to the borehole deviation and azimuthally rotated to borehole image/dipmeter data as necessary. Manual dip picking of the traced and classified features is then undertaken. Sleeve goniometry can be performed on half-cut, three-quarter-cut and full core.

Significantly greater accuracy and detail can be captured from the 360° photograph goniometry method. Supplied 360° core photographs are loaded into TerraStation software where they are spliced, referenced to the borehole deviation and azimuthally rotated as per the traditional method. The photograph method is less time consuming, which means that core viewing room rental facilities are kept to a minimum, and most importantly, many more geological features can be identified and oriented with greater accuracy.

BHICS staff have petrographic experience of clastic, carbonate, igneous and metamorphic rock types. All petrographic evaluation is undertaken on our Olympus microscope, which is fitted with a high resolution Canon digital camera system. We outsource our thin section preparation to
Independent Petrographic Services Ltd. where samples can be cleaned, stained and prepared at specified positions on the sample.

Petrographic evaluation of rock samples, core, sidewall cores and cuttings can be undertaken to provide: